WELCOME
The Tribulation Taskforce is a fresh take on the superhero genre!
I love superheroes. My influences are Legion of Superheroes, Silverwolf comics (Legion-X), The Sentinels of Justice from AC comics, X-Men and Sci-fi like Doctor Who, The Tomorrow People and   Eureka!
​
I hope you will give our books a shot and support our love for comic books!

​PS. Although this has a Christian backdrop, it is not Preachy or "Propaganda" as some may have labeled it!
The hero  GROK, along with The Apostle John (who is still alive), search out the globe's greatest heroes to combat the oncoming threat!

Together they will assemble the greatest Superhero force the world has ever seen.
​They are   THE TRIBULATION TASKFORCE!

In a market monopolized by Marvel and DC, small publishers have to find creative ways to get their products to the public!
​One of those ways is Crowdfunding!
Crowdfunding allows up to pre-sell new issues, and when you buy you get a lot of great gifts!
​This helps us raise money for printing costs, and money for producing future issues!

Explore the Tribulation Taskforce Universe! through Stories, biographies, and profiles!
The rapture has occurred all Christians have been removed from the Earth.The new world leader Apollyon has taken control of the Earth’s governments. With his enforcers, The Watchers, The world have become a very different place.
What follows are excerpts from Tribulation Taskforce leader Grok’s journals. These journals are very critical to the uprising of Jewish Christians who have begun to preach to the world that is lost in delusion. 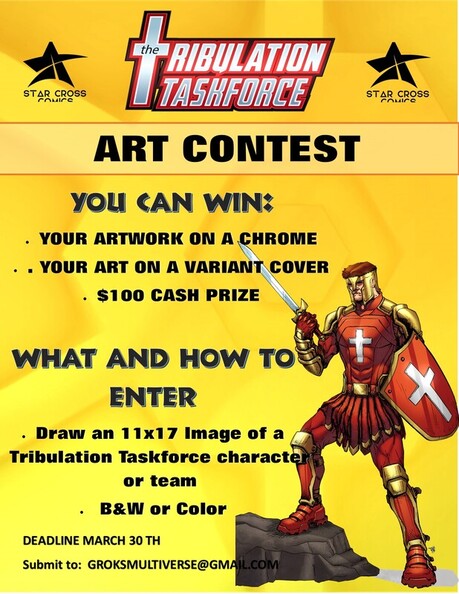